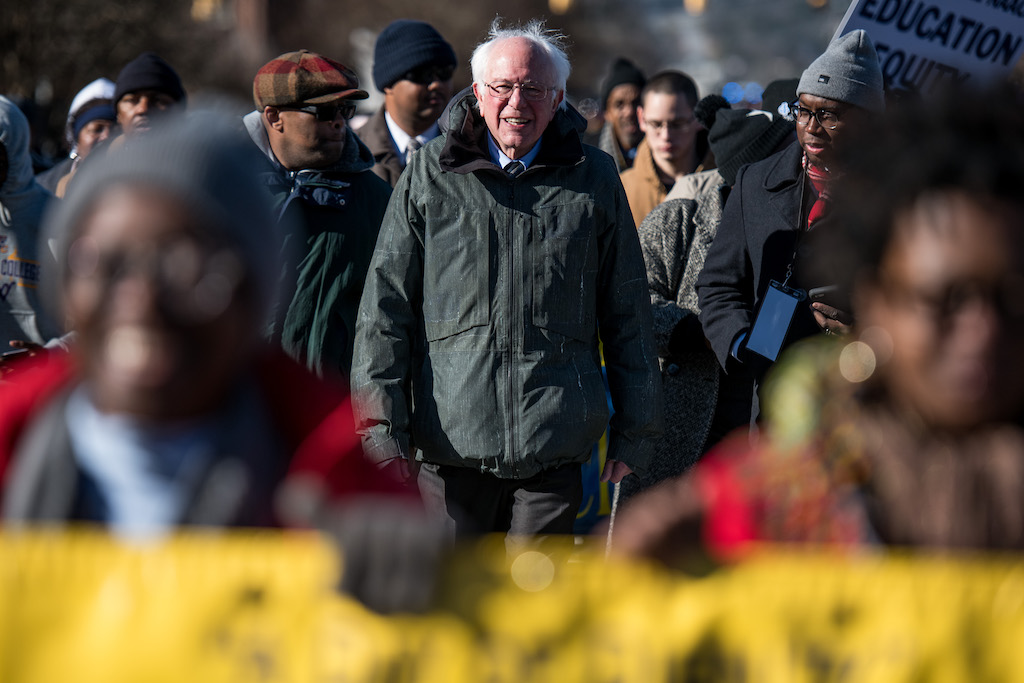 So I’m to the left of most of the folks here, which gives me a different point of view on a lot of things. Today I read a story in Slate (which is liberalish but more contrarian than any other one thing) which triggered my memory of a piece from The Jacobin (which is honest-to-god leftist). I read them in the opposite order than I’m going to put them in for you.

From Slate: America’s Brush With Fascism: The second KKK shared a disquieting kinship with European fascist movements. Why did it fail to take over American politics?

From The Jacobin: Bernie Sanders Wants You to Fight: When Bernie Sanders says “It’s not about me, it’s about us,” he’s not just pandering. He’s trying to create a mass movement — because he knows that without one, his agenda doesn’t stand a chance.

The first piece is long, the second is short. If you want the tl;dr of it, here is the end of the first followed by another bit from the second. I’ll put a bit of my own analysis after them:

Nancy K. McClain wrote:Even in the narrowed political spectrum of the 1920s, Klan leaders confronted some ideas and values that defied their ambitions. Majority rule, religious tolerance, and regard for the rule of law, for example, all had significant, if not majoritarian, followings.Among the reasons ordinarily cited by historians for why the United States bypassed the road some of its great-power peers took is the fact that a strong and inclusive working-class movement was able to pose an alternative to both the far right and the discredited status quo during the Great Depression. As civil rights movement veteran Anne Braden once observed, the times when the Klan has failed to grow are as instructive as those when it has. In neither the 1930s nor the 1960s did it make much headway, she argues, because in each period “strong mass movements advocated real answers to social and economic problems” at the same time as “there was a strong offensive against the ideology of racism.”

If this analysis has merit, then the irony is acute. That phenomenon deemed least American by the dominant culture from the founding of the republic forward—class struggle waged by the propertyless, many of them black Americans and recent immigrants—may have contributed more than we will ever know to keeping reactionary populist movements at bay in the United States during the Great Depression. Perhaps, after all, it was those with the least “stake in society” who had the most stake in defending democracy.

Meagan Day wrote:Bernie then spoke about traveling in 1963 to Washington, DC to attend the March on Washington for Jobs and Freedom, where Dr Martin Luther King — one of Bernie’s two biggest personal heroes, the other being Eugene Debs — gave his most famous speech.Many Americans remember the line from that speech about not judging people by the color of their skin but instead by the content of their hearts. Few remember that King praised the “marvelous new militancy which has engulfed the Negro community” and warned that “the whirlwinds of revolt will continue to shake the foundations of our nation until the bright days of justice emerge.”

Because Bernie’s politics were forged in that era of mass protest, it comes as little surprise that he values extra-parliamentary politics on principle. But there’s a very good strategic reason for him to value grassroots left-wing and working-class movements as well. If he becomes president, he will need them to accomplish anything ambitious.

…The socialist idea morphed in the late twentieth century from a powerful taboo to a tacit impossibility, unions were hollowed out and hamstrung, and the organized Left was placed on the back foot. Without a unified mass movement to represent, Bernie marched to the beat of his own drum for decades.

But in that time, stagnating wages and rising living costs have tested millions of people’s patience with the status quo. The 2008 financial crisis, Occupy Wall Street, and Black Lives Matter further eroded popular tolerance for business as usual, creating new openings for left-wing politics. In a happy historical coincidence, Bernie Sanders happened to have stayed politically consistent, to be in good health, and to be personally willing to provide electoral leadership to a movement getting back on its feet.

The second article explains why Bernie has to run even if he can’t win: Either way, he’s building the infrastructure for a movement. (Obama could have–he had a great start on it–but that’s really not who he is, and so he didn’t. That and his slowness to nominate judges in his first two years are terrible, consequential failures on his part.) The first article explains why that work is so important at this point in history: It’s a valuable defense against a rising tide of fascist and authoritarian thought.

It’s one more “happy historical coincidence” Bernie’s doing that work at this time. If I had to pick one for another ten years of great health and the other to drop dead today, I’d keep him over the Notorious RBG. His work is more important.